We would like to share some customer care stories that highlight the Secure Transportation experience. We have a high commitment to our customers that’s evident every moment your passengers are in our care.

Secure Transportation takes great pride in the daily services we provide to America’s veterans. Since we became transportation partners with the VA in 1992, helping veterans get to their medical appointments has become a sizable portion of the 5,000 non-emergency medical trips we provide every day. So when veterans take time from their busy day to send us a note of thanks, like Regina M. Anderson recently did, it reminds how fortunate we are to be able to serve those who gave so much to serve so many.

Dear Secure Transportation:
The Anderson family wishes to thank you for the extraordinary service you provide in support of veterans. It’s unprecedented for a company to deliver the quality of service we get almost every day.

Each week, I go to the clinic for my appointments. The drivers are always very polite, showing manners and courtesy. Earl, Rey and Vera each go beyond regular duties and take great care with my comfort, care and safety. Other veterans I speak to say the same. I thought we should write a letter to express our gratitude for the exceptional service they provide.

I have been in the VA’s care for almost twenty years, and Secure Transportation has done the best job of supporting veterans of any company I’ve ever come in contact with. The thanks we can give you is so small compared to what your company’s employees do for veterans like us.

Thank you so much.

Providing exceptional, reliable non-emergency medical transportation services is something we do every day. Even so, when someone takes the time to show their appreciation, it makes us feel great about the work we do. So when one of our members expressed his gratitude for helping him bring his wife along for a series of doctors’ visits, we wanted to share. 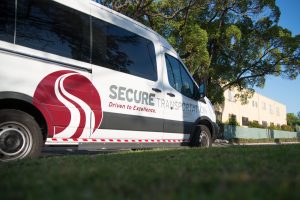 Secure member Tommy Bailey recently had a series of three appointments at two locations to see heart specialists in St. Louis – all on the same day. Usually, Tommy’s family takes him to these appointments, but on this occasion they just weren’t available. So Tommy called Secure Transportation.

Because both Tommy and his wife use a wheelchair, she usually isn’t able to go with him – there’s just not enough room for both chairs. With Secure, the wheelchairs were no problem. That was exciting for both of them, because it meant that for the first time, Tommy’s wife could go with him to meet his doctors.

After making it to all three appointments on time, and with his wife there for support, Tommy made a point to call out the driver’s excellent service. Although his family would happily take him to his future appointments, Tommy said he wouldn’t hesitate to rely on Secure Transportation the next time he and the family needs a little extra help. 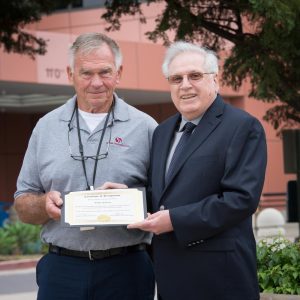 We recently received a lengthy email from a client near La Mesa, filled with praise for Secure and our partner, ELEET. And wow! We know we’re doing something right when we receive praise like this.

Rather than post the entire email, I’ll post excerpts from her email over the next two posts. I think you’ll see why serving our customers makes us so proud.

Here’s what she had to say, edited for length:

To be honest, being at the mercy of others, there is always the potential for something to go awry. But not here! Not with Secure Transportation!

From the beginning, I’ve had such a pleasant experience with Secure Transportation. The level of service and knowledge of your staff is fantastic! Specifically, Tiffany, Amber, [and] Ashley have been extremely helpful in ways that I never expected. Not only did they assist me, but they’ve gone above & beyond to resolve my issues concerning missing trip information that should’ve come directly from [a partner], but didn’t.

Each of your associates has treated me as an individual with dignity and respect, not a number. I know for a fact that their jobs aren’t always easy, but you’d never know this because they do their work with a smile; figuratively speaking. I’m not only pleased with their service, but impressed, beyond belief, with how each of them has treated me in our conversations. Most of the time, I don’t need to call Secure, but when I do, it’s a seamless and smooth transaction! I’m very grateful for each of them! They really have no idea just how they’ve impacted my life.

I feel that each and everyone of them was handpicked and because of that, they provide a high standard of service for individuals like me. So, thank YOU for allowing them to represent your company, the company you’ve worked so hard to build.

We’re humbled to receive such praise. At Secure, we work hard to provide a human touch along with excellent customer care. We’re proud to hear that it makes a difference.

I’ve received many kudos over my many years with Secure Transportation. After all, doing the right thing is one of our core values, and people respond to that. But one of the most positive, passionate, pleasurable calls I’ve taken in my professional career came from a son calling about the care we provided his mother.

Here’s what he said:

“Secure has the most amazing people working here. I mean everyone from dispatchers, to drivers, to customer service agents. The drivers treat my mother with so much respect, and they are always willing to help her with anything she needs. They always open the door for her, and offer to help her in every way possible. Everyone is so courteous, kind, and professional.”

I was already touched, but then Mr. Luce became emotional. In a tone of deep appreciation, he said that he had spoken with our team member Latasha, and praised her for her helpfulness, and just how generally nice it was to speak with her.

He ended by saying

“If I could buy stock in your company, I WOULD!”

Here was a customer who was looking for transportation for his mom, and found a team of people who provided more than transportation, but such caring service that it moved him just speaking about it.

That was the best feedback that I could ask for. That’s the level of customer care we strive to provide.